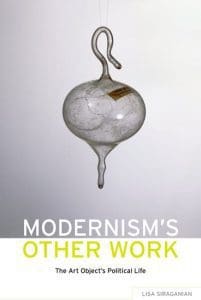 Modernism’s Other Work challenges deeply held critical beliefs about the meaning-in particular the political meaning-of modernism’s commitment to the work of art as an object detached from the world. Ranging over works of poetry, fiction, painting, sculpture, and film, it argues that modernism’s core aesthetic problem-the artwork’s status as an object, and a subject’s relation to it-poses fundamental questions of agency, freedom, and politics. With fresh accounts of works by canonical figures such as William Carlos Williams and Marcel Duchamp, and transformative readings of less-studied writers such as William Gaddis and Amiri Baraka, Siraganian reinterprets the relationship between aesthetic autonomy and politics. Through attentive readings, the study reveals how political questions have always been modernism’s critical work, even when writers such as Gertrude Stein and Wyndham Lewis boldly assert the art object’s immunity from the world’s interpretations. Reorienting our understanding of the period, Siraganian demonstrates that the freedom of the art object from the reader’s meaning presented a way to imagine an individual’s complicated liberty within the state. Offering readers an original encounter with modernism, Modernism’s Other Work will interest literary and art historians, literary theorists, critics, and scholars in cultural studies.