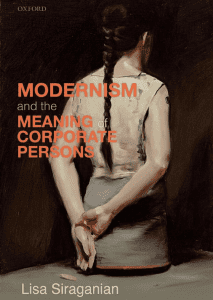 The Modern Language Association of America today announced its sixth annual Matei Calinescu Prize for a distinguished work of scholarship in twentieth- or twentieth-first-century literature and thought. The winner is Lisa Siraganian, associate professor of comparative thought and literature and J. R. Herbert Boone Chair in Humanities at Johns Hopkins University, for Modernism and the Meaning of Corporate Persons, published by Oxford University.

The Matei Calinescu Prize was established in 2016 in honor of Matei Calinescu, a Romanian poet and scholar who taught at Indiana University, Bloomington. The prize is one of eighteen awards that will be presented on 8 January 2022, during the association’s annual convention, to be held in Washington, DC.

The committee’s citation for the winning book reads:

“At a time of reckoning with crucial issues of racial justice in their relation to the legal and ontological foundations of personhood, Lisa Siraganian’s Modernism and the Meaning of Corporate Persons stands out as a game-changing work. Siraganian’s professional grounding in case law, brilliantly brought to bear on texts of literary modernism, advances the field of law and literature and the humanities more generally. Her critical parsing of the jurisprudential contradictions arising from the concept of corporate personhood also reveals the tacit complicity of personhood with modernist notions of will, intention, and belief. Siraganian eloquently tracks how legal abstractions have been instrumental in the justification of slavery and unequal protection under the law. The consequences are major, affecting matters of free speech and political representation. The book is a stellar example of critical legal thinking in dialogue with literary theory.”