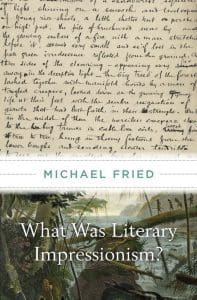 “My task which I am trying to achieve is, by the power of the written word, to make you hear, to make you feel―it is, before all, to make you see. That―and no more, and it is every-thing.” So wrote Joseph Conrad in the best-known account of literary impressionism, the late nineteenth- and early twentieth-century movement featuring narratives that paint pictures in readers’ minds. If literary impressionism is anything, it is the project to turn prose into vision.

But vision of what? Michael Fried demonstrates that the impressionists sought to compel readers not only to see what was described and narrated but also to see writing itself. Fried reads Conrad, Stephen Crane, Frank Norris, W. H. Hudson, Ford Madox Ford, H. G. Wells, Jack London, Rudyard Kipling, Erskine Childers, R. B. Cunninghame Graham, Edgar Rice Burroughs, and Robert Louis Stevenson as avatars of the scene of writing. The upward-facing page, pen and ink, the look of written script, and the act of inscription are central to their work. These authors confront us with the sheer materiality of writing, albeit disguised and displaced so as to allow their narratives to proceed to their ostensible ends.

What Was Literary Impressionism? radically reframes a large body of important writing. One of the major art historians and art critics of his generation, Fried turns to the novel and produces a rare work of insight and erudition that transforms our understanding of some of the most challenging fiction in the English language.