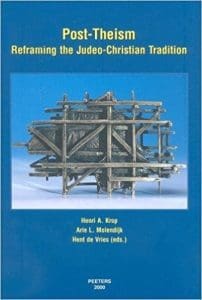 What, if anything remains of religion after the demise of traditional theism and the theologies based upon it? What are the consequences of so-called Post-theism for the modern scholarly study of religion (in Religionswissenschaft and philosophical theology or church dogmatics, in the philosophy of religion as well as in the more recent phenomenon of comparative religious studies)? written in honor of Professor Hendrik Johan Adriaanse whose intellectual trajectory, recounted here in extensive personal reflections, has lead to an incisive inquiry into the possibilities of thinking and experiencing “After Theism” (the title of a fundamental article reprinted here). Reframing the Judeo-Christian Tradition raises this question from three different perspectives : first, by spelling out the historical and intellectual backgrounds that have led to the supposed end of theism as it had been known through the ages; secondly, by discussing the systematic relationship between the disciplines of theology and competing concepts of rationality; and, thirdly, by sketching out the contours of a philosophical thought that ventures beyond the most tenacious classical and modern presuppositions of theism. Along the way, the contributors explore a variety of ways in which the concepts and arguments, imagery and rhetoric of the Judeo-Christian traditions are in need and in the process of being constantly displaced. teach Philosophy, the history of Christianity, and Metaphysics, respectively, at the Erasmus University, The University of Groningen, and the University of Amsterdam.