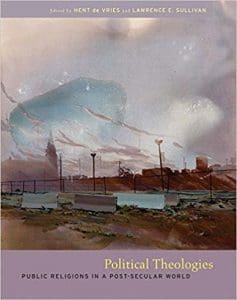 What has happened to religion in its present manifestations? In recent years, Enlightenment secularization, as it appeared in the global spread of political structures that relegate the sacred to a private sphere, seems suddenly to have foundered. Unexpectedly, it has discovered its own parochialism―has discovered, indeed, that secularization may never have taken place at all.

With the “return of the religious,” in all aspects of contemporary social, political, and religious life, the question of political theology―of the relation between “political” and “religious” domains―takes on new meaning and new urgency. In this groundbreaking book, distinguished scholars from many disciplines―philosophy, political theory, anthropology, classics, and religious studies―seek to take the full measure of this question in today’s world.

This book begins with the place of the gods in the Greek polis, then moves through Augustine’s two cities and early modern religious debates, to classic statements about political theology by such thinkers as Walter Benjamin and Carl Schmitt. Essays also consider the centrality of tolerance to liberal democracy, the recent French controversy over wearing the Muslim headscarf, and “Bush’s God talk.” The volume includes a historic discussion between Jürgen Habermas and Joseph Cardinal Ratzinger, now Pope Benedict XVI, concerning the prepolitical moral foundations of a republic, and it concludes with explorations of new, more open ways of conceptualizing society.