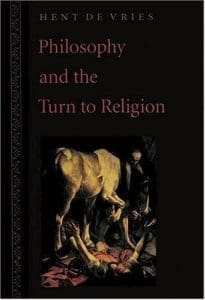 If religion once seemed to have played out its role in the intellectual and political history of Western secular modernity, it has now returned with a vengeance. In this engaging study, Hent de Vries argues that a turn to religion discernible in recent philosophy anticipates and accompanies this development in the contemporary world. Though the book reaches back to Immanuel Kant, Martin Heidegger, and earlier, it takes its inspiration from the tradition of French phenomenology, notably Emmanuel Levinas, Jean-Luc Marion, and, especially, Jacques Derrida. Tracing how Derrida probes the discourse on religion, its metaphysical presuppositions, and its transformations, de Vries shows how this author consistently foregrounds the unexpected alliances between a radical interrogation of the history of Western philosophy and the religious inheritance from which that philosophy has increasingly sought to set itself apart.

De Vries goes beyond formal analogies between the textual practices of deconstruction and so-called negative theology to address the necessity for a philosophical thinking that situates itself at once close to and at the farthest remove from traditional manifestations of the religious and the theological. This paradox is captured in the phrase adieu (à dieu), borrowed from Levinas, which signals at once a turn toward and a leave-taking from God―and which also gestures toward and departs from the other of this divine other, the possibility of radical evil. Only by confronting such uncanny and difficult figures, de Vries claims, can one begin to think and act upon the ethical and political imperatives of our day.