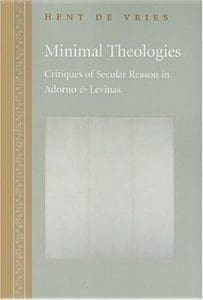 What, at this historical moment “after Auschwitz,” still remains of the questions traditionally asked by theology? What now is theology’s minimal degree? This magisterial study, the first extended comparison of the writings of Theodor W. Adorno and Emmanuel Levinas, explores remnants and echoes of religious forms in these thinkers’ critiques of secular reason, finding in the work of both a “theology in pianissimo” constituted by the trace of a transcendent other. The author analyzes, systematizes, and formalizes this idea of an other of reason. In addition, he frames these thinkers’ innovative projects within the arguments of such intellectual heirs as Jürgen Habermas and Jacques Derrida, defending their work against later accusations of “performative contradiction” (by Habermas) or “empiricism” (by Derrida) and in the process casting important new light on those later writers as well. Attentive to rhetorical and rational features of Adorno’s and Levinas’s texts, his investigations of the concepts of history, subjectivity, and language in their writings provide a radical interpretation of their paradoxical modes of thought and reveal remarkable and hitherto unsuspected parallels between their philosophical methods, parallels that amount to a plausible way of overcoming certain impasses in contemporary philosophical thinking. In Adorno, this takes the form of a dialectical critique of dialectics; in Levinas, that of a phenomenological critique of phenomenology, each of which sheds new light on ancient and modern questions of metaphysics, ethics, and aesthetics. For the English-language publication, the author has extensively revised and updated the prize-winning German version.