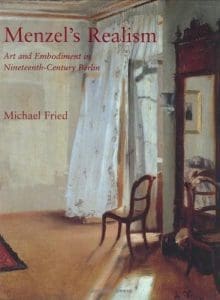 Adolf Menzel was one of the most important German artists of the 19th century, yet he is scarcely known outside his native land. In this study a leading art historian argues that Menzel deserves to be recognized not only as one of the greatest painters and draftsmen of his century but also as a master realist whose work engages profoundly with an extraordinary range of issues – artistic, scientific, philosophical and socio-political. Michael Fried explores Menzel’s large and fascinating oeuvre, and in so doing seeks to make the artist’s achievement accessible to a wide audience. Fried compares Menzel’s art with that of the 19th-century’s two other great realist painters, Courbet and Eakins. Analyzing paintings, drawings and prints from all stages of Menzel’s long career, he asserts that the distinctive quality of Menzel’s realism is found in his concern with evoking the multi-sensory, fully-embodied relationships of persons with the universe of physical objects, tools and situations. Fried establishes connections between Menzel’s work and a broad array of extra-artistic contexts, among them the writings of the empathy theorists, Kierkegaard on reflection and the everyday, Helmholtz on vision, Fontane’s “Effi Briest”, Duranty’s art criticism, Simmel on modern urban life, E.T.A. Hoffmann’s “art of seeing”, and Benjamin on traces. He also explores the complex relationship between Menzel’s version of “extreme” realism and the exactly contemporary technology of photography. The resulting work establishes Menzel as a key artist of modernity.