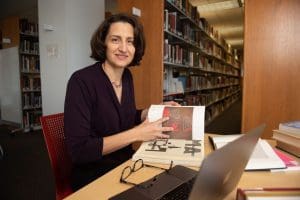 The Department of Comparative Thought and Literature is pleased to announce that Lisa Siraganian will join the faculty as the J. R. Herbert Boone Chair in Humanities, effective July 1, 2019. Prior to her arrival at Hopkins, Professor Siraganian was the Ruth Collins Altshuler Director of the Dedman College Interdisciplinary Institute and an Associate Professor of English at Southern Methodist University. She is the author of Modernism’s Other Work: The Art Object’s Political Life (New York: Oxford UP, 2012), shortlisted for the Modernist Studies Association Book Prize (2013) and her essays have appeared in Law and Literature, American Literary History, Modernism/Modernity, Modern Fiction Studies, nonsite, Post45, and elsewhere. Her work has been supported by the American Academy of Arts and Sciences, the American Council of Learned Societies, and the Andrew W. Mellon Foundation.