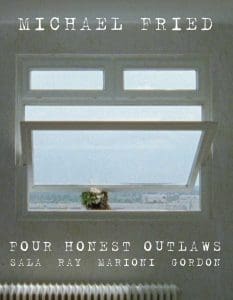 In this strongly argued and characteristically original book, Michael Fried considers the work of four contemporary artists–video artist and photographer Anri Sala, sculptor Charles Ray, painter Joseph Marioni, and video artist and intervener in movies Douglas Gordon. He shows how their respective projects are best understood as engaging in a variety of ways with some of the core themes and issues associated with high modernism, and indeed with its prehistory in French painting and art criticism from Diderot on. Four Honest Outlaws thus continues the author’s exploration of the critical and philosophical territory opened up by his earlier book, the magisterial Why Photography Matters as Art as Never Before. It presents a vision of the most important contemporary art as not only not repudiating modernism in the name of postmodernism in any of the latter’s many forms and manifestations, but also actually as committed to dialectically renewing certain crucial qualities and values that modernism and premodernism brought to the fore, above all those of presentness and anti-theatricality.

Four Honest Outlaws takes its title from a line in a Bob Dylan song, “To live outside the law you must be honest,” meaning in this case that each of the four artists has found his own unsanctioned path to extraordinary accomplishment, in part by defying the ordinary norms and expectations of the contemporary art world. Filled with stunning images throughout and accompanied by a DVD illustrating works by Sala and Gordon discussed in its pages, Four Honest Outlaws is sure to provoke controversy even as it makes a dramatic bid to further transform the terms in which the art of the present should be understood.